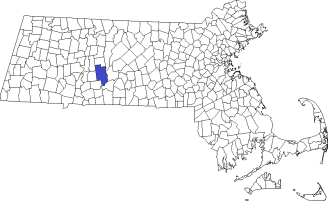 “Due to local differences, the Belchertown soldiers’ monument, which has been standing on the village common some little time, has never been dedicated, and there is a possibility that it never will receive a formal christening.”[1] So opined a writer for the Springfield Republican in the winter of 1885. The funds for the Belchertown monument came partly through donations and partly through a town tax. Much of the controversy seems to have stemmed from a debate as to whether to locate the monument in the center of the Common or at the south end.

Exactly why the difference mattered so much is unclear but the debate led to a heated town meeting during which the monument committee was dissolved and the south end location was eventually chosen.[2] All this notwithstanding, the monument was eventually dedicated with large ceremonies. Colonel William B. Shurtleff of Springfield, former commanding officer of the 46th Massachusetts Infantry, made the dedication address.[3]

Shurtleff concluded by remarking on the broadening of the purpose of the monument to include not just dead, but those veterans then living. “This was just,” he said, “…they should have equal honor here.” He went on, “This should be, as it is, their monument, your monument, veterans who stand before me, yours, who fought as bravely and by the grace of God longer than your slain comrades.” He then made a telling remark, indirectly criticizing the national effort to expand pensions, “Fellow citizens, you have in this act repaid your surviving soldiers more richly than if you had compelled Congress to swell the pension list to include every one of them. Is not this true, comrades?”[4]

The contractor was the Monumental Bronze Company of Bridgeport, Connecticut one of the largest manufacturers of Civil War monuments in the country at that time. The statue, known as the “Infantryman,” appears in towns both North and South (the only alteration for southern versions was a “CS” on the belt buckle instead of “US”). The owners of the company extolled the enduring nature of the medium which would last, they claimed in advertisements, long after granite monuments had crumbled away. Unfortunately, time has shown that white bronze monuments, which are hollow, have a tendency to buckle and crack.

This was, until recently, the case with Belchertown’s monument which had developed a somewhat alarming bend in the column and numerous cracks. It was restored by the Royalston Arts Foundry–a project which required the complete disassembly of the monument and the installation of a stainless steel skeleton. The Belchertown monument now stands in excellent condition.

More than a dozen versions of the Monumental Bronze’s “Infantryman” stand in Massachusetts but Belchertown’s iteration is the largest. The statue stands atop a tall column and plinths decorated with reliefs of drums, flags and muskets–34 feet overall. It features the names of four battles, “Gettysburg,” “Wilderness,” “Fair Oaks,” and “Port Hudson,” likely due to a large number of local casualties resulting from those engagements. The plaques record the names of 328 men who served in the Revolution and the Civil War. In the case of the Civil War, the names are listed on separate plaques for those then living and the dead. A total of 57 dead are listed, though some of these died after the war. Other sources indicate that 38 Belchertown men died in service.[1] 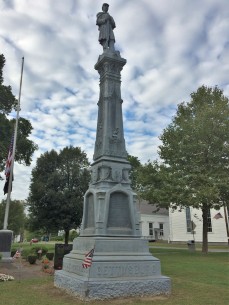