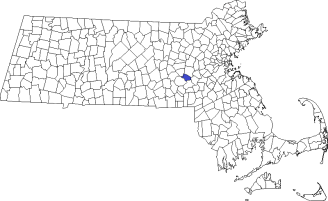 The Ashland Public Library was established in 1880 but made due without a dedicated building until 1903. In that year, a $10,000 grant provided by Andrew Carnegie (one of many such donations he made for new libraries across country) made the building possible. The handsome building in the Georgian style was dedicated on May 28, 1904.[1]

Not long after, the town established a committee to develop a proposal for a Civil War memorial consisting of two marble plaques (pictured below) in the lobby of the library. This plan was approved by town meeting in 1910. A movement for a monument of some sort in Ashland was underway as early as 1868 but was set aside by town meeting at that time. The new library renewed interest and provided an appropriate location.[2]

Ashland’s Grand Army of the Republic Post added to this memorial the same year by procuring a cannon and a quantity of shells from the Springfield Armory and setting them in front of the library in tribute to those that served in the war. The shells are gone but the gun remains. Researchers with the Ashland Historical Society have determined that the cannon is an 8″ Rodman, model 1861, cast in 1864 at the Seyfert McManus & Co. Foundry in Reading, Pennsylvania. It’s history during the war is unknown.[1]

The largest group of Ashland men to enlist together numbered thirty soldiers who comprised roughly one-third of Company E of the 5th Massachusetts Militia. They served with the 5th Massachusetts during its second term of service–nine months from September 1862 to July 1863. During this term the unit was based in New Bern, North Carolina. The regiment primarily served garrison duty and was only occasionally engaged in combat during expeditions into the countryside surrounding New Bern. They saw their heaviest combat during the Goldsboro Expedition, the objective of which was to destroy the Goldsboro Bridge and disrupt Confederate supply lines. This was successfully accomplished. In returning to New Bern, the regiment served as rear guard, withstood heavy fire and repulsed an infantry charge. 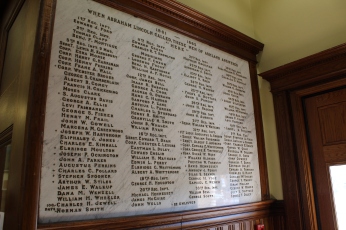