The Newburyport memorial occupies a large portion of Atkinson Common. It consists of two large cannons, bronze tablets recording the names of all 1,511 men from Newburyport who served in the war, and the centerpiece is a bronze sculpture of a soldier atop a granite boulder. The sculpture is among the most striking and lifelike Civil War monuments in Massachusetts. Known as The Volunteer, it was sculpted by Theo Alice Ruggles Kitson in 1902 specifically for this location (and it was recast several times for other locations). Kitson was the most prolific American female sculptor of the early 20th century. Her sculptures are featured in almost every state in the country.

Born Theodora Alice Ruggles in 1871, she showed great skill in sculpting from a young age. Her parents sought to enroll her in several prestigious Boston art schools but she was repeatedly denied simply because was a woman. This barrier eventually prompted her use the name “Theo” rather than Theodora. Commissions, she found, could be obtained more easily under the ambiguous name Theo Ruggles Kitson, or sometimes “Tho. A. R. Kitson.” One piece of correspondence from a potential client addressed to “Theobald Kitson” proves the tactic worked.[1]

An up-and-coming young sculptor eventually agreed to train Theo. His name was Henry Hudson Kitson. Born in England in 1863, he came to the United States around 1877. He brought Theo and her mother to Paris in 1887 were she trained for three years under various artists including Pascal. She earned an honorable mention at the Salon des Artistes Francais in 1890—the first woman to do so. In 1893, back in the U.S., she had four works exhibited in the Women’s Building in the Columbian Exposition in Chicago. In 1895, she garnered another first when she became the first woman to be admitted to the National Sculpture Society.[2]

Theo married Henry Kitson in 1893. They worked together in a studio in Boston and eventually in Quincy, Massachusetts. Henry Kitson created a number of well-known works, including the Minute Man in Lexington and a statue of Admiral Farragut in Boston. But his health was poor and Theo ultimately became the bread winner of the family.[3]

In designing Newburyport’s The Volunteer, Theo rejected the common form of so many Civil War memorials of the late 19th century. In towns across Massachusetts and beyond, many statues of soldiers appear rigid and lifeless, typically at parade rest, the muzzle of their weapon poised, Theo said, as though they were “ready to shoot his own chin off.”[4] Her memorial would be different. 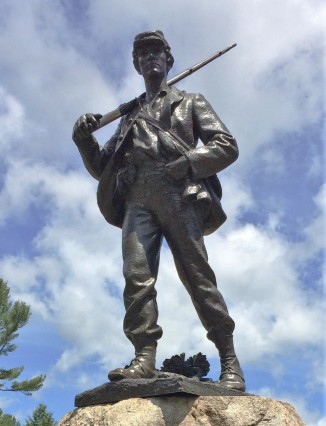 The Volunteer is remarkable, not only for its accuracy but for its sense of lifelike movement. The soldier is shown in light marching order, coat unbuttoned, trousers bloused into his woolen socks, musket thrown over his shoulder in a loose version of right-shoulder-shift. A Boston Globe reporter writing about The Volunteer observed no only that Theo had produced the first Civil War soldiers’ memorial designed by a woman but also that she was the first sculptor to so perfectly capture the realism and spirit lacking in so many monuments. Breaking away from the confines of stern tradition Kitson “had the courage to give exact expression to the very qualities for which the volunteer soldier has always stood.”[5]

Kitson’s The Volunteer was reproduced as the Massachusetts monument in Vicksburg Memorial Park in Mississippi. Before long other Massachusetts towns ordered castings of Theo’s Volunteer. North Attleborough, Sharon, Townsend, Ashburnham, Topsfield and North Andover are among the other towns featuring Kitson’s work.