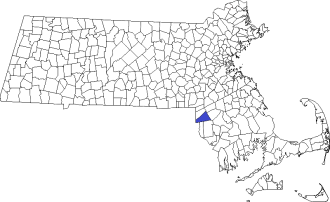 Attleboro’s monument was restored in 2018 through funds appropriated by the city. The work was done by Skylight Studios of Woburn and coordinated by a committee chaired by former city councilor Frank Cook. The difference is remarkable. Prior to restoration, a heavy, pitted patina obscured the details of the fine statues and pieces of the monument had been broken or stolen.[1]

Originally constructed in 1908 on a small park now known as Gilbert-Perry Square, the monument was moved in 1929 to its current location in Capron Park. It was designed by J. N. White & Sons of Quincy who also supplied the granite. The statues, representing a color-bearer, an infantryman and a sailor, were cast by the Ames Foundry of Chicopee. These three are copies of statues also found on the Webster Soldiers and Sailors Monument. See the Webster article for more information on the eccentric sculptor of this group of statues, Finn Haakon Frolich.

One of the designs passed up by the monument committee was rendered by a local artist, George Nerney. It would have depicted a bronze soldier in a leisurely pose sitting on a boulder—an attempt to capture a glimpse of the soldier as he was in less formal conditions in camp day after day. The design was admired but ultimately dropped in favor of a more traditional monument.

Major Everett S. Horton was one of Attleboro’s local heroes in the Civil War. In 1862 he helped recruit a company for the 47th Massachusetts Infantry, a nine-months regiment. He served with the 47th as a Second Lieutenant. When his term was up, he recruited another company for the 58th Massachusetts Infantry and commanded it as captain. He fought in several major battles during the Overland Campaign, was wounded at Cold Harbor in 1864 and then was taken prisoner during the Battle of Poplar Grove Church. He spent five months in the horrific conditions of Libby Prison in Virginia until he was exchanged. It was an experience he never forgot. After the war, he became a prominent local politician, serving as chair of the Selectmen, then a State Representative and Senator. As head of a group of former prisoners of war, he successfully petitioned the state legislature to place a monument in memory of the Massachusetts men who died at Andersonville Prison. He was a member of the memorial’s planning committee and was present for the dedication in 1901.[2] 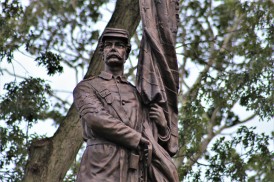 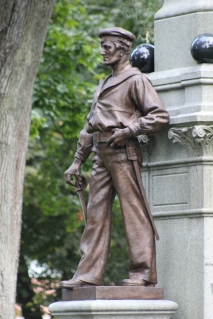 [1] George W. Rhodes, “Monument Work Underway in Attleboro,” The Sun Chronicle, July 2, 2018.
[2] For more information about Major Horton and the Attleboro monument, see the city’s website on the monument.