At the time of the war, Wakefield was known as South Reading. The name change took place in 1868. Mrs. Harriet Flint bequethed the majority of the cost of Wakefield’s Soldiers Monument. One of the Commonwealth’s well-known philanthropists of the time, Mrs. Flint inherited a considerable fortune from her husband and then proceeded to more than double it through energetic and wise business pursuits. She funded libraries and other public buildings in both Wakefield and North Reading, gave generously to schools, churches and veterans organizations, and established the Wakefield Home for Aged Women.[1]

Upon her death, she left more than $100,000 (the equivalent of several million today) to various charities. One of her bequests was made to the town for a monument which would, according to her will, be “symmetrical in architecture, beautiful in design and finish, attended with solid, thorough workmanship – a monument worthy of the men to whom we dedicate it.”[2]

The Van Amringe Granite Company of Boston won the contract to manufacture the monument. The company frequently worked as a sub-contractor for the Smith Granite Company of Rhode Island–one of the largest manufacturers of granite monuments in New England. For the monument in Wakefield, the Van Amringe Company obtained rights to reproduce at least two of Smith Granite’s figures from monuments on the Gettysburg Battlefield. The infantryman is a replica of the 14th New York State monument at Gettysburg by Edward Ludwig Albert Pausch, a Danish born sculptor. The uniform is altered here to be more generic as the 14th New York had distinctive garb. But otherwise the pose, gear, face, position of the rifle, even the fold of the clothing in places are identical. The color-bearer atop the column is a precise replica of the statue from the 13th Massachusetts Infantry monument at Gettysburg by Robert D. Barr. The statue represents the color bearer of the 13th Massachusetts, Sgt. Alonzo Morris. The other figures likely are reproductions of other Smith Granite monuments as well. 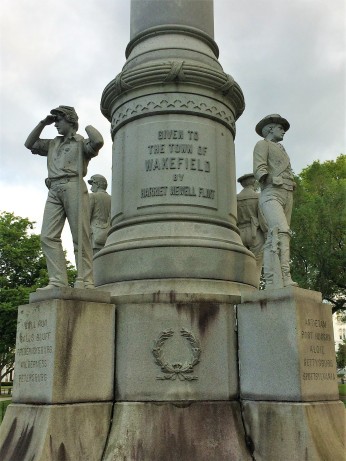