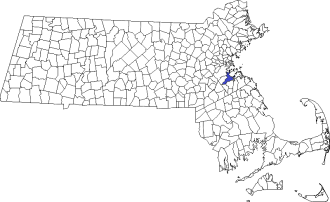 Of the 954 Quincy men who served in the Civil War, 105 lost their lives. Their names are recorded on this granite obelisk on a prominent knoll in Mount Wollaston Cemetery. The dedication ceremonies included a large procession from the town center to the cemetery where remarks were made and the monument committee officially presented the granite memorial to the town. Among the speakers at the cemetery was Col. Charles Francis Adams, Jr. of Quincy (great-grandson of John Adams) who served with the 1st Massachusetts Cavalry and commanded the 5th Massachusetts Cavalry (one of the three Massachusetts African-American units). At the close of the cemetery exercises, the procession marched back to the stone First Parish Church in the town center where the colonel’s brother, John Quincy Adams II, gave the keynote address of the day.

Mr. Adams, who had served on the staff of Radical Republican Governor John Andrew during the war, broke with the Republicans after due to his disagreement with the party on their Reconstruction policies. He became one of the leading Democratic politicians in the state at that time, joining a party then associated with Copperheads in the North, and ran unsuccessfully for governor each year from 1867 to 1871.

During his remarks he offered comments on the sacrifices of the “illustrious dead” but also devoted a portion of his address to the living veterans there assembled. “We should yet not be utterly unmindful,” he said, “of their brave comrades in arms who survive us…Let them be well assured that the debt of gratitude will but grow with time and year by year the veterans of the war of the rebellion will be held in higher and still higher esteem and affection. To you, too, soldiers of war who are gathered with us today, we would in this service proclaim high honor.”[1]

The monument was admired at the time of its construction–indeed, one local publication called it “one of the best specimens of monumental architecture to be found in the State.”[2] However, with time and the construction of larger monuments in nearby cities and towns, residents began to look forward to a more imposing memorial in Quincy. Franklin Curtis, Adjutant of the Quincy Grand Army of the Republic Post, reported in 1910 that the veterans of Quincy “are not satisfied with the monument for the soldiers of the Union they now have in their midst,” and called it a “small affair.”[3] The larger monument hoped for was never built.