Phillipston is a rural town that serves as the northernmost gateway to the Quabbin Reservoir. According to the 1860 census, the population was only 764 people. Fifty-seven of her men served in the War of the Rebellion out of a prewar population of 391 males (some of whom were too young, others too old to serve). Six never made it home.

The oldest from Phillipston to serve was Russell Carruth, a 44 year-old merchant who left his business to enlist as a private in September of 1862 to serve with the 53rd Massachusetts Volunteer Infantry. He was promoted to second lieutenant before leaving for service in the Gulf, where he saw action outside Baton Rouge and Clinton Louisiana.

For many years, Phillipston displayed a wooden monument while funds were raised for something more permanent. Phillipston mustered together sufficient funds to mount this obelisk in what was then called Central Cemetery, now Upper Cemetery, to her men who served, and her fallen. 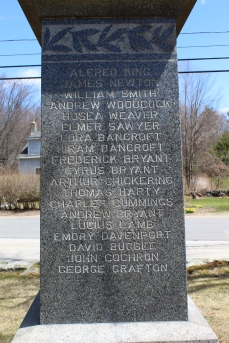