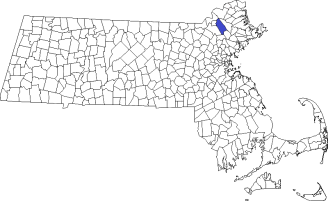 As a rule, we do not include in this project’s purview monuments dedicated in general terms “to those who served in all wars.” While many of these are beautiful and certainly appropriate, they are not specific to the Civil War and do not inform us as to how the Civil War is remembered. An exception will be made in the case of North Andover for two reasons: first, the monument was originally planned as a Civil War monument and depicts a soldier of that war, and, second, the statue was sculpted by one of the preeminent Civil War monument sculptors–Theo Alice Ruggles Kitson.

North Andover’s monument is a variation (and a singular one) of Kitson’s popular sculpture known as “The Volunteer.” She sculpted the first version of “The Volunteer” in 1902 for Newburyport’s Civil War memorial. It was reproduced for the Massachusetts Civil War monument at the Vicksburg National Military Park and later for several Massachusetts towns including North Attleborough, Ashburnham, Sharon and Townsend. North Andover’s version depicts the same individual but stepping forward in a completely different pose, making this statue unique. Whereas other towns could utilize the existing mold, North Andover’s required a new sculpture by Kitson and an original casting.

It is the same youthful “Volunteer” in light marching order, coat unbuttoned, trousers bloused into his woolen socks, blanket roll across his chest, depicting the soldier as he truly appeared in the field rather than the parade-ground formality of most Civil War monuments. However, in this version, rather than holding his musket thrown over his shoulder in a loose version of right-shoulder-shift, as if on the march, here he advances with the musket at port-arms, as if on skirmish duty and ready to engage.

Kitson, whose name unfortunately is not widely known today, was the most prolific American female sculptor of the early 20th century. Her sculptures are featured in almost every state in the country. A more thorough biographical sketch can be found on our Newburyport page. Put more briefly, Theo Alice Ruggles, a native of Brookline, showed great skill in sculpting from a young age. She encountered numerous barriers or prejudice being a young woman but found that doors opened when she applied to art schools and sought commissions under the name “Theo” rather than Theodora.[1] She married an up-and-coming young sculptor named Henry Hudson Kitson and trained in Paris where she earned an honorable mention at the Salon in 1890 (the first woman to do so). She and her husband returned to Massachusetts in 1893 and set up a studio in Boston. She was the first woman admitted to the National Sculpture Society in 1895.[2] 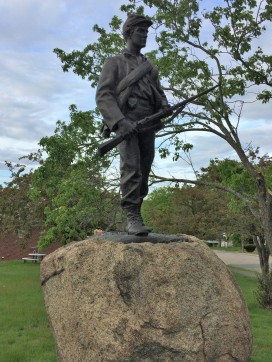 Not long after the close of the war, North Andover planned to build a monument to those who had served the Union cause and lost their lives. The project was repeatedly postponed until 1912 when Kitson was engaged to design the sculpture. At that point, the committee decided the monument should honor all those from Andover who served in wars from King Philip’s War to the Spanish-American War. The monument was dedicated on Flag Day, June 14, 1913.[3] The boulder on which the statue is mounted bears no inscription. Due to this fact, there is often some confusion as to what he represents. A catalog of 20th century war monuments published not long ago calls him a World War I soldier (a peculiar error for a publication on the subject) and locally he is often referred to as the “Minuteman.” Perhaps some signage would clear up this confusion. All this notwithstanding, it is a striking and life-like work–a remarkably accurate representation of a Massachusetts Civil War volunteer.