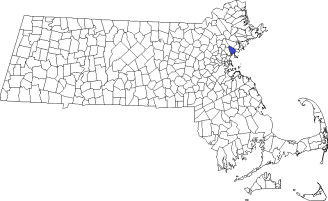 The Soldiers’ Monument in Lynn was dedicated on the anniversary of the Battle of Antietam (a common date for such dedications in Massachusetts) in 1873. The sculptor, John A. Jackson, chose allegorical figures rather than the usual standing soldier, a fact which was not entirely popular with Lynn residents. More than three decades after its dedication, a representative of the Lynn Grand Army of the Republic Post wrote, “There are many who would prefer designs and figures more indicative of the times they were made to commemorate.”[1] The attractive monument is indeed unusual for its more classical theme and it is not readily apparent that it is a Civil War memorial even after reading it’s single, simple inscription, “To the Memory of Her Sons Slain in Defense of the Nation.” A total of 283 men from Lynn died in the war.

The central figure is meant to represent the city of Lynn. Holding a laurel wreath, she is, according the a Boston Globe report of the dedication, “crowning her sons who fell in a just war.” The shield she holds bears the city’s seal. On the right, facing north, is a figure representing Justice. On the left, facing south, is a figure representing War. All three are female in the Grecian style. Each are remarkably fine works.[2]

Of the soldiers buried in Lynn, perhaps the best known was Lt. Col. Charles R. Mudge who commanded the 2nd Massachusetts Infantry at Gettysburg. 23 years old, a member of Harvard’s class of 1860, Mudge had risen through the ranks from First Lieutenant. He was shot in the leg at Winchester, grazed across the ribs by a bullet while in command of the 2nd Massachusetts color company at Antietam, and commanded the regiment at Chancellorsville when that responsibility fell upon him due to the disability of his superior officers. His regiment dug in on the wooded slope of of Culp’s Hill at Gettysburg on the second day of battle, preparing for an assault. Near the close of the day, they were moved to reinforce the far left flank, though by the time they got there, the day’s action was just about over. They marched back to Culp’s Hill on the Union’s far right flank near Spangler’s Spring and were surprised to find that their trenches had been occupied by Confederates.

The next morning, July 3, they were ordered to take those trenches back. To do so, they would have to charge a entrenched enemy across an open field. When Mudge received the order, he paused for a moment, then, in disbelief, calmly asked the orderly to repeat it. Hearing again his brigade commander’s instructions, Mudge replied, “Well, it is murder, but it’s the order.”[3] Early in the charge, Lt. Col. Mudge was shot just below the throat and died almost instantly. Five color bearers of the 2nd Massachusetts were also cut down. An officer of the regiment described the charge in terms that would mystify a modern reader–“awful, yet grand.”[4] 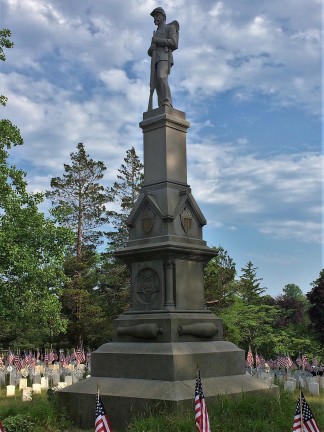 This statue was placed by the Grand Army of the Republic General Frederick W. Lander Post No. 5 in 1905. It replaced an earlier and smaller stone urn monument which was dedicated in 1893. The members of the post were not satisfied with the modest memorial at the center of such an expansive burial plot and so commissioned one featuring a soldier in full marching order, standing at parade rest.[5]

Three Civil War Medal of Honor recipients are interred in Pine Grove Cemetery: Capt. John Adams who received the medal for his bravery during the Battle of Fredericksburg, Color Sergeant Benjamin Franklin Falls for his bravery with the 19th Massachusetts in repelling Pickett’s Charge during the Battle of Gettysburg, U.S. Navy Quartermaster William Poole who served about the USS Kearsarge when she destroyed the Confederate raider Alabama.

The veterans burial plot surrounding the cemetery monument is quite large and when devotedly decorated with flags around Memorial Day, it is an impressive sight.