The large Saugus monument consists of a grouping of statues: a soldier and sailor, both in bronze, and a granite allegorical female figure with shield and helmet representing “America.” The whole was designed by Melzar Hunt Mosman, a war veteran who had served in North Carolina and Mississippi and nearly died of fever during the Siege of Vicksburg. Before designing the Saugus monument, he had been a sculptor with the Ames Manufacturing Co. and in that capacity sculpted statues in Northampton, Kingston and Westfield, among other locations. By the time Saugus contracted with him, Mosman had established his own foundry, the Chicopee Bronze Works. The sailor is identical to the earlier one he sculpted for Northampton and the soldier is very similar to his infantryman in Northampton and Kingston. Saugus announced the acceptance of his proposal over about 30 others in April 1890.[1]

Over 5,000 attended the dedication ceremony on July 4, 1895. The monument apparently was completed a few years before but the official ceremonies were delayed for reasons presently unclear.[2]

The monument was gifted to the town by Henry E. Hone of North Saugus who willed $10,000 to the town for this express purpose. His son, John H. Hone, enlisted with the 2nd Company Massachusetts Sharpshooters at age 18. A small lot of Corporal Hone’s letters to an aunt recently went up at auction. In one, written in during the aftermath of the Battle of Chancellorsville, he records:

We took a great many prisoners. (One of them says to me, (you ain’t such bad men as I thought you were)…they seem to be as tired of this war as we are, and long for the close, though they think it will last as long as Abe Lincoln is president. We have to carry 8 days rations besides our tents and clothing, which is no very small load to carry through mud, ford rivers, climb hills and double quick every other mile with drunken officers on horses to lead off…Do you ever show my letters to any one [?] I want you to burn them…[3]

Corporal Hone survived the war. Roughly 15 of his comrades in arms from Saugus did not. 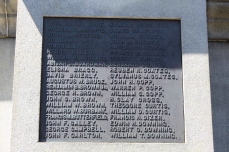