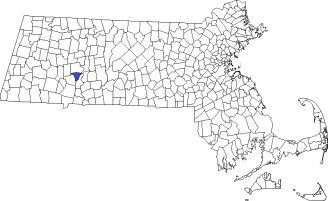 Easthampton dedicated its new town hall on June 30, 1869. Standing 130 feet tall, the south tower of the building was dedicated to the memory of the town’s deceased soldiers in the late war. A tablet of Italian marble is affixed to the exterior of the tower listing the names and dates of death of those killed in action and those who died of disease. The primary inscription reads, “1869 Easthampton Erects this Tower a Memorial to These her Sons Who Died for their Country during the Great Rebellion.”

The architect, Charles Edward Parker (1826-1890), is well known for his design of several imposing town halls and churches across Massachusetts–most of them in the Italianate style inspired by great Florentine palazzi. He also designed the soldiers monument in Weymouth and the Isaac Davis monument in Acton.

Ensign H. Kellogg of Pittsfield, former Speaker of the Massachusetts House, gave the principle address. As was typically the case during the late 1860’s, with memories of the war still fresh, dedication exercises in Massachusetts often recalled the prewar hostility of the “Slave Power” and the wrongness of the southern cause. Such addresses often hailed the end of slavery though they rarely added a call for support of the civil rights amendments under heated debate in Congress in the years after the war.

As this was also the dedication of a town hall, Kellogg devoted most of his address to the history of Easthampton and its institutions. But he concluded by addressing the war, the rise of the Slave Power, and emancipation. Kellogg said, “The cause that slavery assigned for its attack on the Union, that it itself had been attacked and was in danger from the North, was a pretense. Slavery did not want to live under the same roof with freedom…Exclusive slave empire it would have.” He compared slavery to a diseased limb. The removal of this “diseased part” caused the patient much pain and fever but would result in a restoration of health. “The deed is done. The problem is solved…and America stands disenthralled of its great burden.” Again, his words echo the common northern viewpoint that with slavery gone, the work was over even though a state of war over the future of freedmen still exited in the South.[1]

The name of Major General George C. Strong is prominently featured on the tablet along with a summary of his service. He had been a student at Williston Seminary in Easthampton and though he lived in town for just a few years, Easthampton honored him conspicuously. Born in Stockbridge, Vermont, Strong was a career army officer. He is best known for commanding the second assault on Fort Wagner on Morris Island in Charleston Harbor. The charge was led by the well-known African-American 54th Massachusetts Infantry and dramatized in the film Glory. Strong is briefly depicted in the film. He was wounded in the assault and died of tetanus while convalescing in New York City.