This fine statue was cast at the National Fine Art Foundry in New York, owned and managed by Maurice J. Power. His operation was responsible for numerous Revolutionary War and Civil War memorials around the country. Among the best known are the Irish Brigade Monument at Gettysburg and the New York City Soldiers and Sailors Monument in Green-Wood Cemetery, Brooklyn. The infantryman in Clinton, with his distinctive casual pose and an arm tossed across the barrel of his musket, is a refined version of the infantryman first sculpted for the Brooklyn monument by Henry J. Ellicott. The Brooklyn version was one of the very first monumental depictions of the common American soldier of the Civil War and greatly influenced later statues.

Charles H. Burleigh, an architect of Worcester, is credited with making “refinements” to the design, according to several newspapers. It seems probable his design changes were to the architectural elements of the pedestal, which is of unusually large proportions, rather than to the statue itself, but this is not entirely clear.[1] Other copies of Clinton’s statue, sometimes called “The Soldier at Rest,” can be found in Lawrence and Springfield. The Clinton statue preceded the others.

The monument was originally located at the corner of Church and Walnut Streets in front of Clinton’s first Town Hall. When the building burned in 1907, the monument very narrowly escaped disaster. In order to make room for a larger town hall, in 1908 it was moved across the street to the park where it stands today.

One of Clinton’s war dead was First Sergeant Charles Plummer Tidd who fought as one of John Brown’s captains prior to the war. Born in Maine, he located to Clinton in 1856. The same year, he was in Kansas securing funds for John Brown and aiding fugitive slaves in their escape to Canada. Authorities put a price on his head. During Brown’s Harper’s Ferry Raid, Tidd was named as one of Brown’s six captains. He was posted at a schoolhouse outside of town which was to serve as a place to rally recruits and supplies. When things went sideways, Tidd escaped but suffered for a month as he evaded authorities, making his way north from Harpers Ferry on foot through Maryland and Pennsylvania. He went back to Clinton and, when the war broke out, enlisted as a First Sergeant with the 21st Massachusetts Infantry under the name Charles Plummer, claiming to be from Wisconsin. According to the regimental historian, he was widely regarded as a formidable soldier and his abolitionist views influenced many in his company. He died pf disease aboard the steamer Northerner just after the regiment disembarked at Roanoke Island, North Carolina to fight their first engagement.[2] 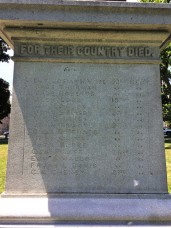