Roughly half the cost of the monument was donated by Jonathan Tyler Barker. He was a peddlar and trader, described as “an eccentric man of saving habits.”[1] He may have started his career as an eccentric peddlar but by the time the monument was built, he was a prosperous farmer who had saved enough money to make a large bequest to a free school in Boxford as well as the monument.

The names of 97 Boxford men who served in the war are listed. Of these, 27 died in service. According to a history of Boxford written in 1880, “…the bodies of most of them [are] now mouldering in the sunny regions of the South, their graves unknown and unhonored, with no memorial stone but the cenotaph at home, on which their names are engraved.”[2] It is a poignant reminder of the significance of these monuments to those who could not recover the remains of their husbands or sons.

Curiously, Perley’s History of Boxford and local newspaper accounts of the dedication describe the monument as listing only the names of the dead. Perley’s book even has sketches of such tablets which do not match what is presently on the monument. Another curiosity, the names of those who died were divided into two lists, East and West Boxford, affirming the very separate identities the two villages have (a geographical distinction not seen on monuments elsewhere). It seems that originally the monument was intended to memorialize those of the West Parish, the names of those from the East Parish were then added, and the whole replaced with an alphabetical listing of all who served from Boxford.

A remarkable incident involving two soldiers, brothers, from Boxford occurred on the evening after the Battle of Antietam on September 17, 1862. Capt. Phineas Spofford commanded Company D of the 8th South Carolina Infantry. About 12 years before the war, he moved to Georgetown, South Carolina where he worked as a shoemaker. At Antietam, his unit was heavily engaged near the West Woods. His brother, Daniel W. Spofford, was a private in the 19th Massachusetts Infantry. Daniel’s regiment was part of Gen. John Sedwick’s division which made an assault on the Confederate line across the same ground where the 8th South Carolina fought. The Union column advanced too far and nearly became surrounded. The 19th Massachusetts retreated in good order with other regiments of the division. But they suffered roughly 50% casualties. Daniel Spofford was shot in the leg.

That evening, Phineas Spofford was walking the battlefield along the Confederate lines and was surprised to find a wounded man from the 19th Massachusetts. Knowing his brother served in that unit, he inquired after Daniel and was told that the 19th Massachusetts was not far away. Phineas somehow managed to get a message to his wounded brother and the two met in a barn between the lines. A comrade of Daniel’s recorded that they spoke of their younger brother, Aaron, who had been killed two and half weeks earlier at the Second Battle of Bull Run. Aside from that, we are left to wonder how that conversation went. Both brothers survived the war. Phineas visited his family in Massachusetts from time to time but never moved back.[3]

Click to enlarge photos below. Lighting conditions made one face very difficult to photograph. For a list of those who served (with biographical notes) see Perley’s history, pages 313-325 (link in footnotes). 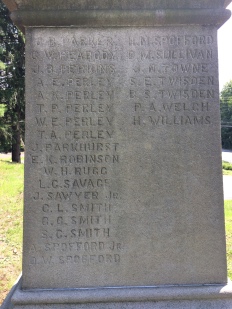