This monument was originally constructed as a memorial to Williams College alumni and students who died in the Civil War. Williams was among the very first colleges in the nation to build such a memorial. Dedicated on July 28, 1868, it was the third monument in the Commonwealth to feature a representation of the common Union soldier and therefore stands with Deerfield and Roxbury as pioneers of this form. When the monument was temporarily taken down in 1925, the few surviving members of the local Grand Army of the Republic post saw an opportunity to adapt the monument and requested that the college rededicate it as a monument not just to students and alumni who served but also to the residents of Williamstown. The re-dedication took place on May 30, 1929 although the finished product with new pedestal did not turn out precisely as envisioned by town or college.

Thirty Williams College men lost their lives in the war. The college first began planning for a memorial in 1863. By 1867 the original pedestal (much larger than the present one and of highly ornate Gothic architecture) was in place but stood empty for more than a year awaiting the statue. Students and townsfolk alike viewed the incomplete structure irreverently and compared it to a church steeple taken down and put on the ground.[1]

The statue was put in place in July 1868. It is a fine sculpture produced by James G. Batterson and cast at the Ames Manufacturing Company in Chicopee, Massachusetts. Batterson ran a stone work contracting company which would eventually come to be known as the New England Granite Works. His company was responsible for many Civil War monuments across New England and beyond. The monument is attributed to him in several publications, but he was not the sculptor. It seems almost certain that the sculptor was Carl Conrads, who worked for Batterson for many years, although documentation naming Conrads is not presently in evidence.

The statue bears a strong resemblance to Conrads’s famous “American Volunteer” made in colossal form for the Antietam National Cemetery. Conrads’s “American Volunteer” was manufactured in smaller form by Batterson for several towns. The Williamstown version is distinctive not only because it precedes the Antietam “Volunteer” but is cast in bronze–something quite rare for Batterson who almost always produced stone monuments. The facial features, uniform and accoutrements are virtually the same as the Antietam monument, the main difference simply being the pose. It therefore seems that Williamstown’s is a prototype of sorts for the more famous Antietam statue. Other versions of the “American Volunteer” can be found in, Lexington, Braintree, and Billerica.

The dedication in 1868 took place immediately following the college’s commencement exercises. David Dudley Field, an alumnus and lawyer, gave the address. He reflected on the patriotism stirred in the loyal North when Confederates made their “parricidal and insane assault” on Fort Sumter. He perhaps exaggerated the national unity of spirit in describing differences being swept aside in order to preserve the Union. However, he spoke poignantly of the patriotic impulses that motivated his fellow alumni, from the “fair haired youth not yet graduated” to the “gray-haired man” looking back on many years since his college days. “Their work is accomplished,” Field said. “They have no more responsibilities to bear, no more duties to perform. Whatever responsibilities and duties remain devolve upon us.”[2] The fallen had “sealed the unity” of the country and “delivered it from slavery.” It remained for the living to maintain that freedom and unity.[3]

In 1925, the monument was removed and placed in storage when the college undertook the regrading of College Hill upon which it stood. Contemplating the eventual re-installation of the monument, the members of the local E. P. Hopkins Post 209 of the G.A.R. envisioned the addition of plaques listing the names of Williamstown residents who served to the new pedestal. Rev. William Redfield Stocking, commander of the post, wrote to the college Trustees to propose the addition and re-dedication of the monument as a memorial for the entire town. College President Harry A. Garfield wrote back on behalf of the trustees requesting Stocking prepare a list and expressed the board’s, “pleasure in the thought that we could take this occasion to show our desire to cooperate with the citizens of Williamstown in everything that makes for the well-being of the community.”[4]

The monument with a new simplified pedestal was reinstalled in 1928 and the re-dedication took place the following Memorial Day on May 30, 1929. There seems to have been some disagreement as to the placement of plaques. The bronze plaques bearing the names of fallen college alumni and students were not replaced. And the anticipated plaques bearing the names of town residents were not added. It seems the compromise was to have no names at all as the pedestal simply bears the inscription, “1861 – 1865.”

By the time of the re-dedication there were but three remaining members of the Williamstown Civil War veterans post. Two were unable to participate in the ceremonies but Post Commander Stocking (aged 85) marched in the procession and gave the re-dedication remarks.[5] Stocking was 18 years old when he enlisted and served three years with the 34th Massachusetts Infantry. He was wounded at the Third Battle of Winchester, Virginia on September 19, 1864. Before the war’s end, he was promoted to sergeant. During the rededication, Stocking offered a few light-hearted reminiscences of Williams graduates who had served. He quoted Fields’s original address, imagining students who would pass the monument and say, “This is the monument of my countrymen who fell in the great Civil War which sealed the unity of my country and delivered it from slavery…” 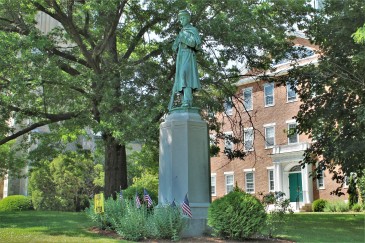