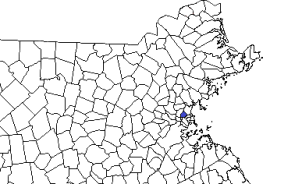 Chelsea erected three monuments to her soldiers who served in the Civil War. The city’s first soldiers’ monument was placed in the Garden Cemetery in the eastern part of Chelsea in 1866–a date which ranks it among the oldest in the Commonwealth. The next, the Chelsea Soldiers’ and Sailors’ Monument, is among the very first “standing soldier” monuments in Massachusetts and was constructed on an extraordinary scale for its time. The third, the Chelsea monument to her veterans buried in Woodlawn Cemetery in Everett is likely the only monument in the Commonwealth placed by one city within the bounds of another.

Beginning with the most prominent of the monuments, the Chelsea Soldiers’ and Sailors’ Monument was erected in 1869, superseding the more humble Garden Cemetery monument which, evidently, was deemed insufficient. The new monument was originally located in Union Park, a rectangular garden space where the Joseph A. Browne School is now located. It is dedicated to the 167 Chelsea men who died in the war.

The innovative and influential design by Franklin Simmons of Lewiston, Maine was ahead of its time. Under construction just three years after the war, Chelsea’s was the third Massachusetts monument to feature a representation of a common soldier when the vast majority of monuments were purely architectural in nature. It was the first in Massachusetts to place him in such a lofty position atop a 33 foot column rather than a low pedestal. In short, it was a grand, bold design and a harbinger of things to come.

Simmons was 27 when the project began and at the beginning of what would be a distinguished artistic career. His only major public work prior to Chelsea was the 1868 soldiers’ monument in his hometown of Lewiston, Maine. Later, he sculpted statues of Ulysses Grant and Roger Williams which are featured in the U.S. Capitol Building and the striking Peace Monument on the Capitol grounds, among other works.

In 1908, the Great Chelsea Fire destroyed virtually all of the city’s business district, claiming some 3000 structures over a 500 acre area. The open space of Union Park became an island of safety during the blaze where many people sought refuge. Due to its distance from any buildings, the Soldiers’ Monument was spared. A tent manned by relief agencies was set up next to the monument in the days following and belongings salvaged from the fire were piled high around it. City officials carefully planned out and built a new commercial and civic area  encompassing Bellingham and Basset Squares. As part of this massive project, the Soldiers’ Monument was moved in 1911 to Basset Square opposite the new City Hall where it stands today.[1]

For years, the monument was in need of restoration to repair or replace a number of broken or missing elements. The city undertook a major restoration in 2019 and the monument is now in excellent condition.

The first, and largest, group of Chelsea men to enlist in the war numbered 130 and served with the 1st Massachusetts Infantry. Nearly all of these were members of the Chelsea Light Infantry (sometimes known as the “Chelsea Volunteers”) a pre-war militia unit which became Company H of the 1st Massachusetts. The company was commanded by Capt. Sumner Carruth, a 23 year-old mechanic living in Chelsea at the start of the war. Twenty of the Chelsea Light Infantry died in service. The Boston Athenaeum holds in their collections a remarkable composite photograph depicting the members of the “Chelsea Volunteers” which can be viewed here.

Carruth was wounded in the arm during the Peninsular Campaign in the spring of 1862 and resigned his commission. After he recovered, he was appointed major in the 35th Massachusetts and played a significant role in recruiting a new company of Chelsea men–a group of 80 who formed the bulk of Company C. Carruth eventually came to command the 35th Massachusetts and went on to the command of two different brigades and the rank of Brevet Brigadier General. 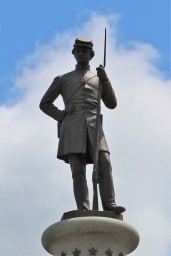 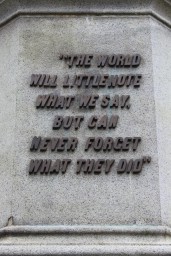 The monument erected by the City of Chelsea on the soldiers’ plot at the Garden Cemetery is in poor condition but this does not diminish its considerable historical importance. It was the city’s first monument in memory of its Civil War dead, erected in 1866. This places it among the first such monuments in the Commonwealth. Three Massachusetts town/city monuments were placed prior to 1866, and ten more in that year. Therefore, the Chelsea monument it is (depending on the month of completion which is presently unclear) among the first ten or so Massachusetts monuments placed. Further adding to its significance, according to an article in the Chelsea Record, Decoration Day exercises (now known as Memorial Day) have been held at the soldiers’ plot in the Chelsea Garden Cemetery in unbroken succession since the first Decoration Day in 1868.[2] A remarkable dedication to tradition.

The city purchased the soldiers’ plot from the cemetery association in 1866, built the monument in that year, and interred the remains of 16 Union soldiers who died in service–three of whom were reinterred from battlefield graves outside Yorktown, Virginia (members of the 1st Massachusetts Infantry). The cemetery presently is locked and therefore the front face of the monument could not be photographed. It reads, “A memorial in honor of the citizen soldiers of Chelsea, who, at the call of their country, and in defense of freedom and the American Union, sacrificed their lives in the civil war of 1861-65.” The opposite face (pictured) reads, “Erected by the City of Chelsea, 1866.”[3]

Many of Chelsea’s Civil War veterans were buried in Woodlawn Cemetery, just over the city line in Everett. Woodlawn was, and still is, one of the prime examples of the great garden cemeteries surrounding Boston created in the mid 19th century. The City of Chelsea voted to establish a soldiers plot here, to pay for individual grave markers of the veterans (some 300) and the Grand Army of the Republic Theodore Winthrop Post No. 35 erected a large monument in the center of the plot.[4] The monument consists of four large cannons welded together in a pyramid formation. The same configuration can be found in Needham and a smaller version in Winchester.