During the war, Holbrook formed the eastern part of Randolph. It separated in 1872. It was named after Elisha N. Holbrook, a wealthy shoe manufacturer and the main proponent of separation. He offered $50,000 to the citizens of the new town for a town hall, library, and to pay off any debts incurred through the cost of separation. His son, Elisha Everett Holbrook, followed in his father’s footsteps and funded numerous town projects, including half the cost of this monument.[1]

Committee work to create a monument to honor those who served and resided within the bounds of what was now Holbrook got underway as early as 1909. Momentum picked up when Mr. Holbrook made his generous offer. The overall design of the monument was by Thomas Carrigg & Son of Holbrook. The statue was sculpted by John Horrigan of Quincy.

As a young man, Horrigan worked as a stonecutter for Frederick Barnicoat whose statue operation was among the largest in Quincy–a town known for its fine monuments. According to the Quincy Historical Society, Horrigan “admired the heroic Grecian statues and thought in dimensions that a sculptor with less cutting talent could not have envisioned.”[2] Horrigan indeed worked in large scale. His best known work is probably the Titanic Monument in Washington, D.C. When large statue of Standish atop the Myles Standish Monument in Duxbury was severely damaged by a lightning strike, Horrigan sculpted a new one based on the original. He is responsible for numerous Civil War monuments which stand in several states.

The statue in Holbrook depicts a young soldier in full marching order including overcoat and knapsack. His rifle is held smartly at the right shoulder shift. He has the look of a new volunteer marching briskly off to the seat of war, a confident expression on his face. It is a fine statue. Unfortunately, it presently has a heavy patina of built up minerals which obscure the finer details of the monument.

Holbrook and Randolph recently collaborated to place a memorial to George M. Lovering, the only resident of Holbrook (and Randolph) to receive the Medal of Honor. The monument and memorial bench were placed at an intersection in Randolph near the Holbrook line long known as George Mason Lovering Square but which, prior to 2012, only featured a small sign. Lovering, who lived in East Randolph, was 1st Sergeant of Company I of the 4th Massachusetts Volunteer Militia. The regiment served in various campaigns in Louisiana–most significant among them were the two failed assaults on the impregnable fortifications of Port Hudson, Louisiana.

During the second assault on June 14, 1863, the 4th Massachusetts charged in advance of their division up a sloped and extremely rugged landscape covered with a ditches, trenches, and massive felled trees. Lovering’s company commander, Capt. Henry B. Maglathlin, later described the charge:

Onward pressed brave men, only to be mowed down by bullets, grape, canister, and shell. The havoc was terrible. All along the lines and angles of the opposing breastwork a continual volley flew–direct fire and cross-fire–before which rank after rank were cut down and swept away as by a besom of destruction…a few of the skirmishers reached the ditch; some plunged in but to find the earthworks too steep and too high to scale…Our men at length were obliged to shield themselves behind logs and stumps, and continued thus to carry on the unequal contest until night dropped its dark curtain over a gory field.[3]

During all this terrible confusion, Sgt. Lovering conspicuously rallied his regiment and, according to his Medal of Honor citation, “rendered efficient aid in preventing a panic among the troops.” His actions also earned him a lieutenant’s commission. Lovering survived the war and lived to age 87. He is buried in Holbrook. 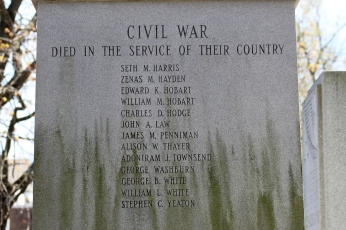