Back when neighboring Plainville was a part of Wrentham, the town’s first Civil War monument was constructed in that part of town in Plainville Cemetery and dedicated on 1903. In 1905, Plainville split off from Wrentham and incorporated as a separate town. Thus, according to the Wrentham Town Clerk in 1910, “the younger town left the parent without a token and, apparently, without prospects.”[1]

But there were, in fact, prospects. In 1911, Mrs. Sadie Towne of Wrentham began holding social gatherings at her home at which she stirred up enthusiasm for a new monument. Eventually, a formal committee was organized with Mrs. Towne as the first president. The committee consisted of 25 women, each of whom had a husband, son, or father who served in the war. They raised funds by various means until they reached the goal.

Many individuals gave remarks during the dedication, including Gen. Elisha Hunt Rhodes whose wartime journal was prominently featured in Ken Burns’s “Civil War” documentary series. The main oration of the day was made by Gen. Alfred S. Roe, a veteran and historian who wrote numerous regimental histories and various reminiscences of his own experiences in the war.[2]

The monument was placed on the spot where Wrentham’s early volunteers were mustered into service of the United States. The first group of about twenty volunteers joined up with several of the first unit to go off to war–the plurality of them served in the 7th Massachusetts. About three weeks after the initial call for troops, Wrentham held a town meeting and voted a plan for generous compensation for additional volunteers. First, the town would establish a fund for aiding soldiers’ families in need. Second, the town would nearly match the government’s pay for soldiers, bringing their salary up to $25 a month (not too shabby at that time). The town also would offer a dollar a week to soldiers’ wives.[3]

This incentive brought forth more than 50 volunteers, nearly all of whom became part of Company I of the 18th Massachusetts Infantry. They made up about half that company’s numbers. The 18th Massachusetts was assigned to the Army of Potomac and fought in some of the largest battles of the war. On May 5, 1864, two companies of the 18th Massachusetts were picked for skirmish duty to probe the enemy’s position in the moments leading up to the start of the Battle of the Wilderness. While serving as one of the skirmishers, Charles Wilson, an 18 year old farmer born in Wrentham, was shot and killed. He became the first casualty of the entire Overland Campaign.[4] Wilson lived in Franklin, Massachusetts at the time of his enlistment and is therefore not listed on the Wrentham monument. 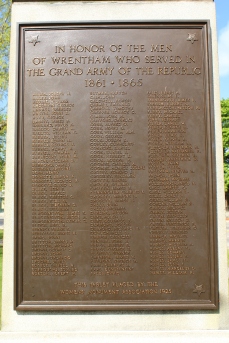