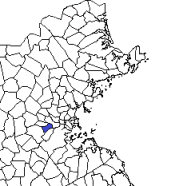 During the Civil War, Brighton was an independent town. It was not annexed to Boston until 1874. Brighton’s monument is among the oldest in the Commonwealth (about nine other monuments were dedicated in Massachusetts in the year after the war). Its primary inscription reads, “In Grateful Remembrance to the Patriotic and Brave Volunteers of Brighton Whose Lives Were Sacrificed to Liberty and the Union during the Great Rebellion.” The civil engineer and architect who designed the monument, George F. Meacham, is best known as the designer of the Boston Public Garden. He also designed numerous Boston area mansions, public buildings, and at least two other Civil War monuments: Waltham and Fairhaven.

During the procession, Brighton’s Civil War veterans marched with arm-bands of black crepe and holding springs of evergreen.[1] The sprigs were deposited at the base of the monument as they passed (that particular ritual stands out as distinctive among these many ceremonies).

Rev. Frederick Augustus Whitney, former pastor of the First Church in Brighton, gave the keynote address. He compared the monument to ancient mausoleums but praised the fact that it was not a monument to any king but to freedom. “Freedom…” he said, “was necessarily involved in every worthy issue of that war.” It took only a few months, Whitney asserted, for newly enlisted soldiers to understand “the purpose of the rebels…and to learn how slavery was at the bottom of the whole strife.”[2] His emancipationist tone is not uncommon for early dedication ceremonies just in the wake of the war. That tone was typically replaced in subsequent decades by more general expressions of patriotism and honor. 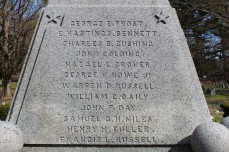 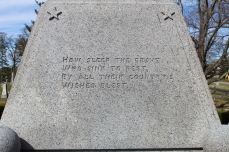