Haverhill’s monument is rare in that the marble statue was modeled on an actual veteran from that city. The contractor for the project was sculptor Calvin Weeks. One of his stone-carvers, Patrick McLaughlin, happened to be from Haverhill and so he was awarded the task of carving the statue. He carved it in the likeness of his 26 year-old son, Frank McLaughlin, who had served in the 50th Massachusetts Infantry and the 17th Massachusetts Infantry and survived the war.[1] It is also rare in that in that it features a standing soldier about 15 years before such statues were common. Most memorials in the years immediately following the war took the form of obelisks. The soldier’s dress uniform–frock coat and shoulder scales–is also distinctive.

One of Haverhill’s more prominent figures in the war was Lieutenant Colonel Henry Splaine who commanded (1864-1865) the 17th Massachusetts Infantry. Haverhill was well represented in that regiment–Companies E and F were made up almost entirely of Haverhill men. Splaine, a 24 year-old shoemaker in 1861, was initially commissioned 1st Lieutenant. By the end of the war he had earned the rank of Lieutenant Colonel and command of the 17th Massachusetts. The regiment served in North Carolina and engaged in various expeditions in the vicinity of New Bern.

Sgt. Benjamin H. Jellison of Haverhill, who served with the 19th Massachusetts Infantry, earned the Medal of Honor during the Battle of Gettysburg. In the midst of Pickett’s Charge, he captured the colors of the 57th Virginia Infantry.

The primary inscription of the monument reads, “In grateful tribute to the memory of those who on land and sea died that the Republic might live, this monument was erected by the city of Haverhill.” Dr. George B. Loring of Salem gave the keynote address during the dedication.[2] 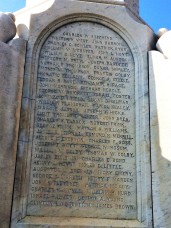