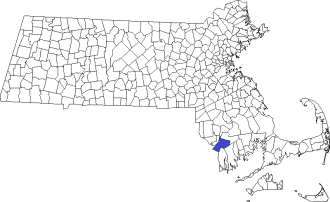 The monument at the Civil War veterans plot in Oak Grove Cemetery was funded by Col. Richard Borden. He also paid for each of the headstones marking veteran graves behind the monument.[1] One of Fall River most successful industrialists and cotton mill owners, Borden was also a leading force in establishing various railroad lines in Southeastern Massachusetts. He had served as a private during the War of 1812 and rose to the rank of colonel of the Massachusetts militia during peacetime. The Richard Borden Grand Army of the Republic Post in Fall River was named in his honor in recognition of his benevolence to the soldiers before and after the war.[2]

In all, Fall River sent roughly 1,800 men to the war. The names of the 163 who died are inscribed on the Oak Grove monument. The first volunteers to go were two companies of the 7th Massachusetts Infantry. Several additional companies followed. The war hit Fall River’s textile industry hard as the supply of southern cotton vanished and manufacturers had to scramble for alternative and inferior supply sources. English textiles flooded the market. This situation was rectified soon enough after the war and the mill town’s population exploded with successive waves of immigrants.[3]

Among the Civil War veterans buried at Oak Grove Cemetery (though not in the soldiers’ plot) are at least two Medal of Honor recipients. Coxswain Hugh Hamilton, US Navy, earned the medal for his bravery aboard the USS Richmond during the Battle of Mobile Bay. And Private James Holehouse of the 7th Massachusetts was awarded the medal after the war for his service during the Second Battle of Fredericksburg during which (according to his official citation) he “advanced beyond his regiment, which had been broken in the assault, and halted beneath the crest. Following the example of these two men, the colors were brought to the summit, the regiment was advanced, and the position held.” 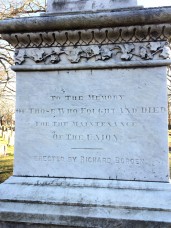 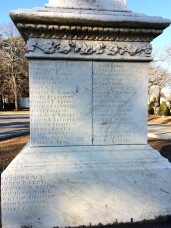 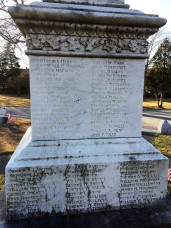 Information is scarce regarding this mostly forgotten memorial at the entrance to John F. Kennedy Park–formerly South Park. It was gifted to the city by Samuel Watson and dedicated in 1901–it originally featured a bronze statue of a soldier at rest.[4] What we see now is not much more than the pedestal. A local magazine article states that the monument was vandalized in 1945 and the statue so badly broken that it was removed and a small granite pyramid was put in its place. Research to date has not turned up any primary source evidence to illuminate this. The curious remnant of the monument today stands in obscurity.[5]