Weymouth’s monument was placed on a steep hill in the Old North Cemetery, a point from which, according the the published dedication exercises, an impressive view of the ocean and surrounding countryside could be gained. The monument itself (due to the deforestation of Massachusetts in the 19th century) was visible from much of the town. The growth of trees in the late 20th century has changed this and the monuments is now more difficult to find.

It was designed by prominent architect Charles Edward Parker who was active from the 1840s until the early 1880s and is responsible for a number of town halls and churches across the Commonwealth. The inscriptions record not only the names of the dead but also the unit, cause of death and date of death.

The monument was dedicated on July 4, 1868, on a day so hot, the parade and ceremonies had to be cut short. “But all,” according to a local newspaper report, “bore the weather’s inflictions with the utmost fortitude.”[1] George B. Loring, a popular orator from Salem and future Congressman, struck an emancipationist tone during his keynote address (something often glossed over during such speeches). He commended the volunteers from Weymouth for bringing to fruition the promises of the Revolution “whose heroes have waited these long and weary years for the confirmation of the truth for which they fought, that ‘all men are created equal.'”[2]

Weymouth’s most prominent figure in the Civil War was Brevet Brigadier General James L. Bates, a successful leather merchant in civilian life. At the start of the war, he signed on as captain of Company H, 12th Massachusetts Infantry which was originally commanded by the well-known and popular figure, Colonel Fletcher Webster, son of the former U.S. Senator from Massachusetts. After Webster was killed during the Second Battle of Bull Run, Bates assumed command of the 12th Massachusetts. He led the unit at the Battle of Gettysburg during very heavy combat and was wounded near McPherson’s Ridge. During the Battle of Spotsylvania in 1864, Col. Bates intercepted some Confederate intelligence which prompted Grant to change direction of the Army of the Potomac during the Overland Campaign. Bates received a commendation for this from Grant. After the war, he served as commander of the Grand Army of the Republic Department of Massachusetts.[3]

The monument was restored and rededicated with appropriate ceremonies on May 12, 2018. 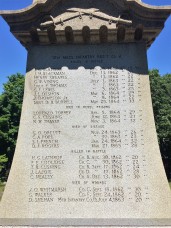