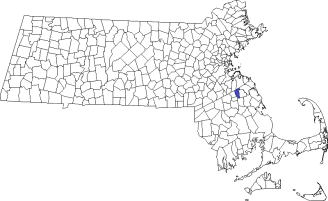 During the Civil War, Rockland was a part of Abington. After it split off in 1874, the town government took measures to secure $2,500 for a monument dedicated to those Old Abington residents who lived in the area recently incorporated as Rockland. Lewis Reed, Adjutant of the Hartsuff GAR Post in Rockland, noted that, after 30 years, the notion of a memorial library gained support and the $2,500 was eventually applied to the library project rather than a soldiers’ monument as originally intended. “It is proper to here state,” Reed wrote, “that to some of the veterans, this use of the funds, raised strictly for monumental purposes, was not at all agreeable.”[1]

The cornerstone of the library was laid December 12, 1903 and the structure completed in 1905. Dedication ceremonies were held on May 6, 1905 with former Governor John D. Long giving the keynote address. A $12,500 grant provided by Andrew Carnegie (one of many such donations he made for new libraries across country) made the building possible. The Boston Herald recorded that laborers and local members of the active socialist party of that era stood “very bitterly” against accepting money from a giant of capitalism and resisted the project at town meeting. They were, however, a minority and the project was approved in 1903.[2]

The tablets in the entryway and rotunda list the names of those who served with one tablet reserved for “Our Unreturned” or those who died in service. 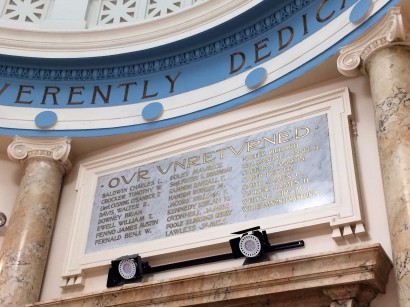