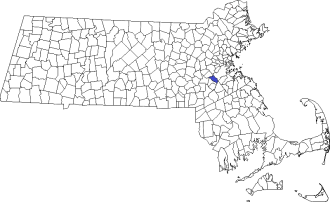 Memorial Hall in Dedham was dedicated on September 29, 1868 to the 47 soldiers of Dedham who died in the Civil War. The building served as Dedham’s town offices for 94 years. Tablets listing the names, regiments and dates of death for each soldier were placed in the main entry hall of the building. Erastus Worthington gave the dedication address and stated, “Let this our Memorial Hall receive a benediction from us all today, God keep it ever from the lightning strike and the consuming fire.” Sadly, the building was torn down in 1962 and a new town administration building was constructed on Bryant Street. The tablets were preserved and installed in the lobby of the new building.

Monument in the Old Village Cemetery those who died in Camp Meigs, which was located about three miles from the cemetery in Readville (an area that straddled the Boston and Dedham border). Camp Meigs was the largest and most active of the training camps in Massachusetts. Roughly one-third of the soldiers who departed Massachusetts for war trained there. During its history, 64 men died at Camp Meigs due to disease or accidents. Their names, dates of death, and regiments are listed on the monument. The first casualty at Camp Meigs was Thomas Tracy, 33 years old, who drowned in the Neponset River adjacent to the camp on August 1, 1861. He was assigned to the 20th Massachusetts but had only arrived just a day prior and had not yet been mustered in. The last was Henry A. Gifford, 15 years old, of the 27th Massachusetts, who died of disease on July 12, 1865. The 27th Massachusetts had just returned from North Carolina and was at Camp Meigs to be mustered out. Sadly, although he had been mustered out, it seems Gifford was too ill to make it home to Lee, Massachusetts and died in the camp hospital. A significant number of the men listed on the monument were African-American. All three of the Bay State’s African-American regiments trained at Camp Meigs. The Commonwealth purchased a large burial lot in the Old Village Cemetery and it seems some of the men who died at Camp Meigs were interred at this location, although it is not clear how many. Most were likely brought home by family. At least six who died of smallpox were initially interred at the camp, then moved to this burial plot. According to D. Eldredge, who in 1908 wrote a brief history for the Meigs Memorial Association (an organization long since defunct) the plot initially contained wooden markers for individual graves but these decaying markers were cast aside when the plot was re-graded by the Commonwealth in 1892. 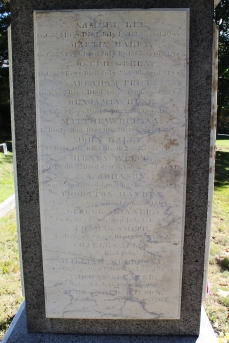 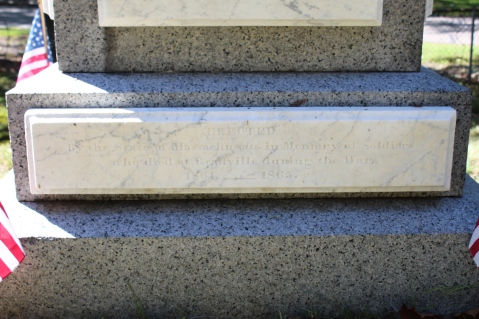 In Brookdale Cemetery, the local Grand Army of the Republic post (Charles W. Carroll Post 144) maintained a soldier’s burial plot for those who served in the Civil War. 14 veterans were buried here. In 1880, the post built this obelisk of rough cut Dedham granite on the plot. It was funded primarily by Eliphalet Stone, a successful Dedham businessman who was active in his support of the soldiers during the war. The primary inscription reads. “Erected in 1880 as a monument to the loyal soldiers and sailors of Dedham, who served in the war of the rebellion 1861-1865. Many of whom died, and rest, in unknown graves and dying broke the bondman’s chain and made the slave a man.”