The monument in Upton was dedicated on October 15, 1890. The statue (but not the base) is identical to the 13th Pennsylvania Infantry monument (one of the “Bucktail” regiments) on the Gettysburg battlefield. That is, with one important distinction…the Upton monument lacks the iconic bucktail in the Gettysburg version’s cap and instead represents a typical Massachusetts soldier. The Bucktail monument was placed in the same year and it seems likely that the Smith Granite Company offered to make a copy for Upton when approached for a proposal.

Rev. George Sumner Ball served as the chairman of the monument committee. At its dedication he gave the benediction and some brief remarks on behalf of the committee. The key note speaker was John D. Billings of Cambridge, a veteran, GAR department commander, and author of “Hardtack and Coffee”—now a well-known and highly valued account of a typical soldier’s day-to-day activities during the war. 219 men from Upton served during the war. The names of the 32 who died are recorded on the monument.

Rev. George S. Ball, the driving force behind the monument, served as chaplain of the 21st Massachusetts Infantry in 1861 and 1862. Born in Leominster, he followed in his father’s path as a harnessmaker, stealing time to read whenever he could. He found a mentor in Rev. Rufus Stebbins of Leominster who, when he was appointed President of the Divinity School in Meadville, Pennsylvania, brought Ball with him and enrolled him. Ball was ordained in 1847, served briefly as pastor in Ware and Plymouth, but spent most of his career as pastor of the Unitarian Church in Upton, Massachusetts.

He took a leave of absence from his pulpit to serve as Chaplain with the 21st Massachusetts in the fall of 1861. The regimental history of the 21st Massachusetts speaks of him in the most superlative terms. From the regiment’s first battle, Chaplain Ball was trudging through swamps with the men, tending the wounded, conducting funeral rights for the dead. He is credited with saving numerous lives by personally bringing wounded from the field to the nearest field hospital and seeing to their prompt treatment. He was wounded, taken prisoner and released at the Battle of Chantilly. He tended wounded of the 21st Massachusetts at battles including Antietam and Fredericksburg. 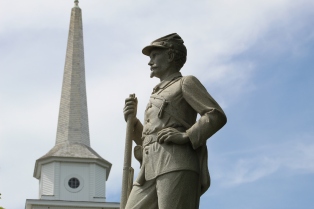 Of him, the regimental historian wrote, “One of the best of chaplains and men, he has his reward in the gratitude of our living and dead…Never losing sight of his duty as a Christian clergyman, he had been far more than a mere chaplain to us…Ardently patriotic, always hopeful, manly, and courageous, he exerted a strong and lasting influence in keeping up the tone of the regiment in its soldierly as well as its moral duties…To our sick and wounded he had been, with unfailing devotion, a brave, tender, and skillful nurse. An honor and grace to his calling and the service, it was a sad day in the regiment when he left us.”[1] 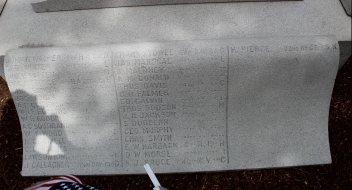 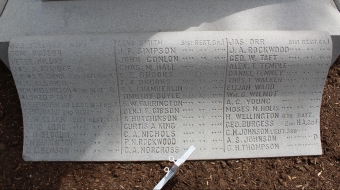