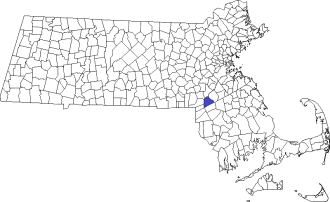 Foxborough’s Memorial Hall, located adjacent to the Town Common. The building was constructed in 1868 and dedicated on June 17, 1870. It served as the meeting place for the Grand Army of the Republic E.P. Carpenter Post 91 as well as the Town Library. Plaques inside the hall list the names of those from Foxborough who served in the Revolutionary War, the War of 1812 and the 23 soldiers of that town who died in the Civil War. The original 9-foot wooden statue of a soldier at parade rest, surmounting the hall, was carved by Civil War veteran and Boston architect/sculptor Samuel Freeman Pratt. He purportedly modeled the statue after photographs of himself in uniform. In 1961 the statue was removed due to severe deterioration and replaced in 1962 with a new and similar wooden statue by Charles Pizzano of Medford. The replacement has had several rounds of repairs over the years. It was removed in 2014 for its most recent restoration, funded in part by the Massachusetts Civil War 150th Commission, and replaced in 2015. At that time, the repaired wooden statue was finished off with a “liquid copper” coating. The building presently serves as a local history museum and headquarters of the Foxborough Historical Society and Historical Commission.[1]