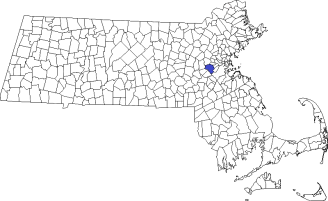 Newton’s monument is remarkable in that it is one of only two such monuments in the Commonwealth constructed during the war. The Somerville monument predates it by a year. However, as Somerville’s was originally dedicated to the returning heroes of their first company to enlist, Newton’s monument (rather technically speaking) is the first Commonwealth Civil War memorial dedicated to all those from a given town who served. It is a noteworthy distinction.

The monument consists of an obelisk atop a knoll and an entablature of marble and granite at the base of the knoll–a unique configuration. The tablets list those from Newton who died in the war. There are no burials on the plot, but many of those whose names are listed are buried nearby. At the time of the dedication, 43 names were listed on two of the three panels. After the remaining nine months of war, 18 more names were added to the two panels. The central panel remains blank, a telling indication that even in 1864, the extent of casualties yet to be endured remained unclear.

Second Lieutenant Eben White is the first name recorded in the top left panel of the entablature. His is an unusual story. He initially enlisted as a private with the 5th Massachusetts Infantry during the first week of the war but was mustered out early. He then served two years with the 1st Middle Tennessee Cavalry (Unionist) and in September 1863 was appointed lieutenant in the 7th Infantry Regiment, United States Colored Troops. His unit was one of a growing number of regiments made up of African-American freedmen recruited from Maryland plantations. These regiments were under the command of Brigadier General William Birney, an abolitionist, lawyer and professor. Birney had instructions from his superiors, empowered by the 1862 Second Confiscation Act, to send army personnel onto Maryland plantations to recruit enslaved men (the Emancipation Proclamation had left slavery intact in the border states).

On October 19, 1863, Lt. White and three other men went onto the plantation of John H. Sothoron and asked two enslaved men there if they wanted to enlist. When they responded in the affirmative, Sothoron and his son both threatened to shoot Lt. White. As White attempted to explain the law to them, the two Sothorons continued their heated and expletive-laden threats and ultimately shot him. At least one of the soldiers with White fired back but the Sothorons escaped, initiating a manhunt organized by the War Department. John Sothoron made his way to Virginia, then Canada and after the war he returned to take possession of his plantation. In 1866, the War Department urged the Governor of Maryland to prosecute him for manslaughter, however Sothoron won the case. The circumstances of the incident are documented in an interesting pamphlet published by Congress in 1874.

The Newton monument underwent extensive restoration in 2013 in anticipation of its 150th anniversary. It was rededicated with fitting ceremonies on Memorial Day, 2014. 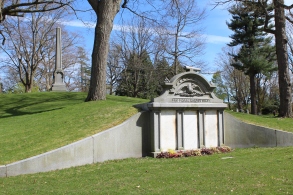